Crystalline structures and structural transitions of copolyamides derived from 1,4-diaminobutane and different ratios of glutaric and azelaic acids 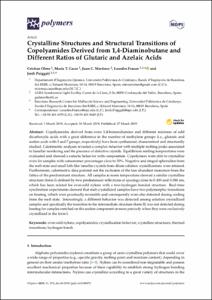 Except where otherwise noted, content on this work is licensed under a Creative Commons license : Attribution 3.0 Spain
Abstract
Copolyamides derived from even 1,4-butanediamine and different mixtures of odd dicarboxylic acids with a great difference in the number of methylene groups (i.e., glutaric and azelaic acids with 3 and 7 groups, respectively) have been synthesized, characterized and structurally studied. Calorimetric analyses revealed a complex behavior with multiple melting peaks associated to lamellar reordering and the presence of defective crystals. Equilibrium melting temperatures were evaluated and showed a eutectic behavior with composition. Copolymers were able to crystallize even for samples with comonomer percentages close to 50%. Negative and ringed spherulites from the melt state and small lath-like lamellar crystals from dilute solution crystallizations were attained. Furthermore, calorimetric data pointed out the exclusion of the less abundant monomer from the lattice of the predominant structure. All samples at room temperature showed a similar crystalline structure (form I) defined by two predominant reflections at spacings close to 0.430 and 0.380 nm, which has been related for even-odd nylons with a two-hydrogen bonded structure. Real time synchrotron experiments showed that melt crystallized samples have two polymorphic transitions on heating, which were practically reversible and consequently were also detected during cooling from the melt state. Interestingly, a different behavior was detected among solution crystallized samples and specifically the transition to the intermediate structure (form II) was not detected during heating for samples enriched on the azelate component or more precisely when they were exclusively crystallized in the form I.
CitationOlmo, C. [et al.]. Crystalline structures and structural transitions of copolyamides derived from 1,4-diaminobutane and different ratios of glutaric and azelaic acids. "Polymers", 1 Abril 2019, vol. 11, núm. 4, p. 572:1-572:19.
URIhttp://hdl.handle.net/2117/171739
DOI10.3390/polym11040572
ISSN2073-4360
Publisher versionhttps://www.mdpi.com/2073-4360/11/4/572
Collections
Share: