Preparation of medicated polylactide micropieces by means of ultrasonic technology 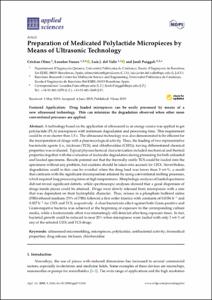 Document typeArticle
PublisherMultidisciplinary Digital Publishing Institute
Rights accessOpen Access
Abstract
A technology based on the application of ultrasound as an energy source was applied to get polylactide (PLA) micropieces with minimum degradation and processing time. This requirement could be even shorter than 1.5 s. The ultrasound technology was also demonstrated to be efficient for the incorporation of drugs with a pharmacological activity. Thus, the loading of two representative bactericide agents (i.e., triclosan (TCS), and chlorhexidine (CHX)), having differentiated chemical properties was evaluated. Typical physicochemical characterization included mechanical and thermal properties together with the evaluation of molecular degradation during processing for both unloaded and loaded specimens. Results pointed out that the thermally stable TCS could be loaded into the specimens without any problem, but cautions should be taken into account for CHX. Nevertheless, degradation could in this case be avoided when the drug load was lower than 3 wt-%, a result that contrasts with the significant decomposition attained by using conventional melting processes, which required long processing times at high temperatures. Morphologic analyses of loaded specimens did not reveal significant defects, while spectroscopic analyses showed that a good dispersion of drugs inside pieces could be attained. Drugs were slowly released from micropieces with a rate that was dependent on their hydrophilic character. Thus, release in a phosphate buffered saline (PBS)-ethanol medium (70% of PBS) followed a first order kinetics with constants of 0.0356 h-1 and 0.027 h-1 for CHX and TCS, respectively. A clear bactericide effect against both Gram-positive and Gram-negative bacteria was achieved at the beginning of exposure to the corresponding culture media, while a bacteriostatic effect was interestingly still detected after long exposure times. In fact, bacterial growth could be reduced to near 20% when micropieces were loaded with only 3 wt-% of any of the selected CHX and TCS drugs
CitationOlmo, C. [et al.]. Preparation of medicated polylactide micropieces by means of ultrasonic technology. "Applied sciences", 1 Juny 2019, vol. 9, núm. 11, p.2360:1-2360:17.
URIhttp://hdl.handle.net/2117/171738
DOI10.3390/app9112360
ISSN2076-3417
Publisher versionhttps://www.mdpi.com/2076-3417/9/11/2360
Collections
Share: