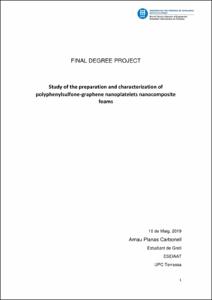 Document typeBachelor thesis
Rights accessOpen Access
Abstract
The core target of the project is the preparation of foams based on polyphenylsulfone (PPSU), a high performance and high temperature thermoplastic, and their subsequent characterization in terms of cellular structure and thermal properties. In a later stage, different amounts of graphene nanoplatelets (xGnP) will be added, with the objective of enhancing the mechanical and functional performance of the foams. The attractive of the project resides on the research of new possibilities for a material intended for high performance applications by means of reducing its density, enhancing its thermal and mechanical performance and extending its functionality. Essentially, the density will have to be reduced as much as possible, with a minimum requirement of a 50% reduction regarding the original PPSU density which is 1,31 g/cm3.
SubjectsFoam, Thermoplastics, Graphene, Nanotechnology, Escuma (Química), Escumes plàstiques, Termoplàstics, Grafè, Nanotecnologia
URIhttp://hdl.handle.net/2117/171692
Collections
Share: