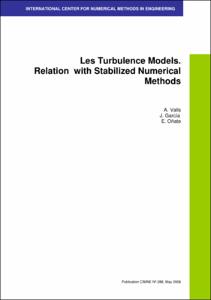 Document typeResearch report
Rights accessOpen Access
All rights reserved. This work is protected by the corresponding intellectual and industrial property rights. Without prejudice to any existing legal exemptions, reproduction, distribution, public communication or transformation of this work are prohibited without permission of the copyright holder
Abstract
Abstract One of the aims of this text is to show some important results in LES modelling and to identify which are main mathematical problems for the development of a complete theory. A relevant aspect of LES theory, which we will consider in our work, is the close relationship between the mathematical properties of LES models and the numerical methods used for their implementation. In last years it is more and more common the idea in the scientific community, especially in the numerical community, that turbulence models and stabilization techniques play a very similar role. Methodologies used to simulate turbulent flows, RANS or LES approaches, are based on the same concept: unability to simulate a turbulent flow using a finite discretization in time and space. Turbulence models introduce additional information (impossible to be captured by the approximation technique used in the simulation) to obtain physically coherent solutions. On the other side, numerical methods used for the integration of partial differential equations (PDE) need to be modified in order to able to reproduce solutions that present very high localized gradients. These modifications, known as stabilization techniques, make possible to capture these sharp and localized changes of the solution. According with previous paragraphs, the following natural question appears: Is it possible to reinterpret stabilization methods as turbulence models? This question suggests a possible principle of duality between turbulence modelling and numerical stabilization. More than to share certain properties, actually, it is suggested that the numerical stabilization can be understood as turbulence. The opposite will occur if turbulence models are only necessary due to discretization limitations instead of a need for reproducing the physical behaviour of the flow. Finally: can turbulence models be understood as a component of a general stabilization method?
CitationValls, A.; Garcia, J.; Oñate, E. "LES turbulence Models: relation with stabilized numerical methods". 2006.
Is part ofPI 288
URIhttp://hdl.handle.net/2117/171689
URL other repositoryhttps://www.scipedia.com/public/Valls_et_al_2006a
Collections
Share: