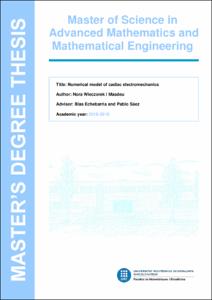 Except where otherwise noted, content on this work is licensed under a Creative Commons license : Attribution-NonCommercial-NoDerivs 3.0 Spain
Abstract
In this project, we develop a Finite Element Method (FEM) formulation that solves the cardiac electrophysiological problem of a three dimensional piece of tissue. This problem is modeled by an electromechanical model that includes the activation of a tension that depends on the cell's transmembrane potential and induces the contraction of the tissue. After applying an implicit time discretization, we end with a nonlinear system that depends on the position and potential at each node. This system is solved using the Newton-Raphson's method at each time iteration. Using this resolution methodology, we present a full implicit scheme. We also implement a faster and less accurate way of solving the coupled system with a staggered scheme: first computing the change of potential, and then actualizing the position of every node. Then, we simulate the electrophysiological model to observe the effect of the grid affects on the results. Finally, using the staggered algorithm, we simulate the propagation of a plane wave and the subsequent tissue contraction.
SubjectsBiomathematics, Biomatemàtica
DegreeMÀSTER UNIVERSITARI EN MATEMÀTICA AVANÇADA I ENGINYERIA MATEMÀTICA (Pla 2010)
URIhttp://hdl.handle.net/2117/171347
Collections
Share: