Specialization in the iStar2.0 language 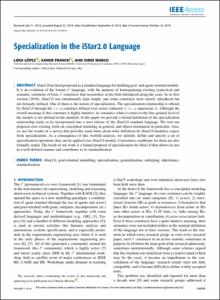 Document typeArticle
PublisherInstitute of Electrical and Electronics Engineers (IEEE)
Rights accessOpen Access
Abstract
iStar2.0 has been proposed as a standard language for building goal- and agent-oriented models. It is an evolution of the former i* language, with the purpose of homogenising existing syntactical and semantic variations of basic i* constructs that researchers in the field introduced along the years. In its first version (2016), iStar2.0 was intentionally kept simple, and some constructs were merely introduced but not formally defined. One of them is the notion of specialization. The specialization relationship is offered by iStar2.0 through the is-a construct defined over actors (subactor x is-a superactor y). Although the overall meaning of this construct is highly intuitive, its semantics when it comes to the fine-grained level of the models is not defined in the standard. In this paper we provide a formal definition of the specialization relationship ready to be incorporated into a next release of the iStar2.0 standard language. We root our proposal over existing work on conceptual modeling in general, and object-orientation in particular. Also, we use the results of a survey that provides some hints about what definition do iStar2.0 modelers expect from specialization. As a consequence of this twofold analysis, we identify, define and specify a set of specialization operations that can be applied over iStar2.0 models. Correctness conditions for them are also formally stated. The result of our work is a formal proposal of specialization for iStar2.0 that allows its use in a well-defined manner and contributes to its standardization.
CitationLópez, L.; Franch, X.; Marco, J. Specialization in the iStar2.0 language. "IEEE access", 9 Setembre 2019, vol. 7, p. 146005-146023.
URIhttp://hdl.handle.net/2117/171246
DOI10.1109/ACCESS.2019.2940094
ISSN2169-3536
Publisher versionhttps://ieeexplore.ieee.org/document/8827478
Collections
Share: