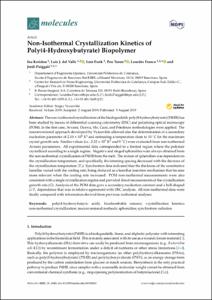 Document typeArticle
Rights accessOpen Access
Abstract
The non-isothermal crystallization of the biodegradable poly(4-hydroxybutyrate) (P4HB) has been studied by means of differential scanning calorimetry (DSC) and polarizing optical microscopy (POM). In the first case, Avrami, Ozawa, Mo, Cazé, and Friedman methodologies were applied. The isoconversional approach developed by Vyazovkin allowed also the determination of a secondary nucleation parameter of 2.10 × 105 K2 and estimating a temperature close to 10 °C for the maximum crystal growth rate. Similar values (i.e., 2.22 × 105 K2 and 9 °C) were evaluated from non-isothermal Avrami parameters. All experimental data corresponded to a limited region where the polymer crystallized according to a single regime. Negative and ringed spherulites were always obtained from the non-isothermal crystallization of P4HB from the melt. The texture of spherulites was dependent on the crystallization temperature, and specifically, the interring spacing decreased with the decrease of the crystallization temperature (Tc). Synchrotron data indicated that the thickness of the constitutive lamellae varied with the cooling rate, being deduced as a lamellar insertion mechanism that became more relevant when the cooling rate increased. POM non-isothermal measurements were also consistent with a single crystallization regime and provided direct measurements of the crystallization growth rate (G). Analysis of the POM data gave a secondary nucleation constant and a bell-shaped G-Tc dependence that was in relative agreement with DSC analysis. All non-isothermal data were finally compared with information derived from previous isothermal analyses
CitationKeridou, I. [et al.]. Non-isothermal crystallization kinetics of poly(4-hydroxybutyrate) biopolymer. "Molecules", 5 Agost 2019, vol. 24, núm. 15, p. 2840:1-2840:24.
URIhttp://hdl.handle.net/2117/171222
DOI10.3390/molecules24152840
ISSN1420-3049
Publisher versionhttps://www.mdpi.com/1420-3049/24/15/2840
Collections
Share: