Can frozen sperm samples withstand being sent to space? Considering the creation of a sperm bank outside Earth 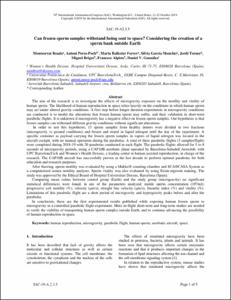 Except where otherwise noted, content on this work is licensed under a Creative Commons license : Attribution-NonCommercial-NoDerivs 3.0 Spain
Abstract
The aim of the research is to investigate the effects of microgravity exposure on the motility and vitality of human sperm. The likelihood of human reproduction in space relies heavily on the conditions in which human sperm may act under altered gravity conditions. A first step before longer duration experiments in microgravity conditions are conducted is to model the alterations that frozen human sperm may suffer, and their validation in short-term parabolic flights. It is unknown if microgravity has a negative effect on frozen sperm samples. Our hypothesis is that frozen samples can withstand different gravity conditions without significant alterations. In order to test this hypothesis, 15 sperm samples from healthy donors were divided in two fractions (microgravity vs ground conditions) and frozen and stored in liquid nitrogen until the day of the experiment. A specific container as payload carrying the frozen sperm samples in vapors of liquid nitrogen was located in the aircraft cockpit, with no manual operation during the parabolas. A total of three parabolic flights (5 samples/flight) were completed during 2018-19 with 20 parabolas conducted in each flight. The parabolic flights allowed for 5 to 8 seconds of microgravity periods, using a CAP10B aerobatic plane operated by Barcelona-Sabadell Aeroclub, with UPC BarcelonaTech and Women’s Health Dexeus, a leading center in human assisted reproduction, in charge of the research. The CAP10B aircraft has successfully proven in the last decade to perform optimal parabolas for both education and research purposes. After thawing, sperm motility was evaluated by using a Makler® counting chamber and SCA®CASA System as a computerized semen motility analyzer. Sperm vitality was also evaluated by using Eosin-nigrosin staining. The study was approved by the Ethical Board of Hospital Universitari Dexeus, Barcelona (Spain). Comparing mean values between control group (Earth) and the study group (microgravity) no significant statistical differences were found, in any of the parameters analyzed: motile sperm concentration (106/ml); progressive a+b motility (%), velocity (µm/s), straight line velocity (µm/s), linearity index (%) and vitality (%). Limitations of this parabolic flight are a short period of microgravity and hypergravity peaks before and after the parabolas. In conclusion, these are the first experimental results published while exposing human frozen sperm to microgravity in a controlled parabolic flight experiment. More in-flight short-term and long-term studies are needed to verify the viability of transporting human sperm samples outside Earth, and to continue advancing the possibility of human reproduction in space.
CitationBoada, M. [et al.]. Can frozen sperm samples withstand being sent to space? Considering the creation of a sperm bank outside Earth. A: International Astronautical Congress. "Proceedings of the 70th International Astronautical Congress". International Astronautical Federation, 2019, p. IAC-19-A2.3.5.
URIhttp://hdl.handle.net/2117/171077
ISBN9781510881655
Publisher versionhttps://iafastro.directory/iac/proceedings/IAC-19/
Collections
Share: