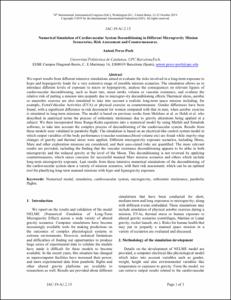 Document typeConference report
PublisherInternational Astronautical Federation
Rights accessOpen Access
Abstract
We report results from di¿erent intensive simulations aimed at evaluate the risks involved in a long-term exposure to hypo and hypergravity loads for a very extensive range of possible mission scenarios. The simulation allows us to introduce di¿erent levels of exposure to micro or hypergravity, analyse the consequences on relevant ¿gures of cardiovascular deconditioning, such as heart rate, mean stroke volume or vascular resistance; and evalatue the relative risk of putting a mission into jeopardy due to micrograv-ity deconditioning e¿ects.Thermical stress, aerobic or anaerobic exercise are also simulated to take into account a realistic long-term space mission including, for example, ExtraVehicular Activities (EVA) or physical exercise as countermeasure. Gender di¿erences have been found, with a signi¿cant di¿erence in risk decrement for women compared with that in men, when aerobic exercise is simulated in long-term missions. The model is based on previous works form Melchier et al. or Heldt et al. who described in analytical terms the process of orthostatic intolerance due to gravity alterations being applied ot a subject. We then incorporated these Runge-Kutta equations into a numerical model by using Matlab and Simulink software, to take into account the complex process of deconditioning of the cardiovascular system. Results from these models were validated in parabolic ¿ight. The simulation is based on an electrical-like control system model in which output variables of the body performance (vascular resistance,blood volume etc) are found while step-by-step changes of gravity and thermal stress were applied. Di¿erent micrograivity exposure scenarios, including Moon, Mars and other exploration missions are considered, and their asso-ciated risks are quanti¿ed. The more relevant results are provided, including the ¿nding that the vascular resistance deconditioning appears to be alike in both microgravity and the reduced gravity at the level of the Moon. This deconditioning is not reversed by applying countermeasures; which raises concerns for successful manned Mars mission scenarios and others which include long-term microgravity exposure. Last results from these intensive numerical simulations of the deconditioning of the cardiovascular system show a variety of mission scenarios, with their risk assessment; which can be an optimal tool for planifying long-term manned missions with hypo and hypergravity exposure.
CitationPerez-Poch, A. Numerical simulation of cardiovascular system deconditioning in different microgravity mission scenarios. Risk assessment and countermeasures. A: International Astronautical Congress. "Proceedings of the 70th International Astronautical Congress". International Astronautical Federation, 2019, p. IAC-19-A1.2.13.
URIhttp://hdl.handle.net/2117/171075
ISBN9781510881655
Publisher versionhttps://iafastro.directory/iac/proceedings/IAC-19/
Collections
Share: