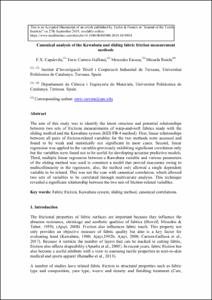 Escusa Julian, Mercedes
Rotela Alvez, Micaela
Document typeArticle
Rights accessOpen Access
Abstract
The aim of this study was to identify the latent structure and potential relationships between two sets of frictions measurements of warp-and-weft fabrics made with the sliding method and the Kawabata system (KES FB-4 method). First, linear relationships between all pairs of friction-related variables for the two methods were assessed and found to be weak and statistically not significant in most cases. Second, linear regression was applied to the variables previously exhibiting significant correlation only but the variables were found not to be useful for developing accurate predictive models. Third, multiple linear regression between a Kawabata variable and various parameters of the sliding method was used to construct a model that proved inaccurate owing to multicollinearity in the regressors; also, the method only allowed a single-dependent variable to be related. This was not the case with canonical correlation, which allowed two sets of variables to be correlated through multivariate analysis. This technique revealed a significant relationship between the two sets of friction-related variables
CitationCapdevila, F. [et al.]. Canonical analysis of the Kawabata and sliding fabric friction measurement methods. "Journal of the Textile Institute", 2020, vol. 11, núm. 6, p. 890-896
URIhttp://hdl.handle.net/2117/170989
DOI10.1080/00405000.2019.1670924
ISSN0040-5000
Publisher versionhttps://www.tandfonline.com/doi/abs/10.1080/00405000.2019.1670924
Collections
Share: