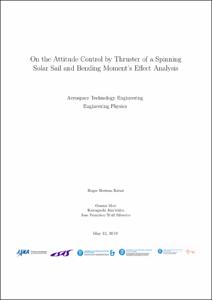 On the Attitude Control by Thruster of a Spinning Solar Sail and Bending Moment Effect Analysis.pdf (15,44Mb)
Share:

CovenanteeJapan Aerospace Exploration Agency
Document typeBachelor thesis
Rights accessOpen Access
Abstract
The membrane dynamics of spinning solar sails have a special relevance when considering attitude control of the spacecraft. Because of being non-rigid structures, local deformation occurs, changing the overall effect of the Solar Radiation Pressure, which might lead to attitude disturbances and unexpected behavior. Thus, an accurate model and study of such dynamics is needed. Until this point, several researches on the topic have been conducted (Nakano, T., et al., 2005 - Takao, Y., 2018), modeling the membrane as a completely flexible body. However, the deformation observed in IKAROS (a spacecraft developed by the Japan Aerospace Exploration Agency (JAXA) to demonstrate solar sail technology) during its low-spin operation suggested a higher rigidity of the sail than the predicted one (Shirasawa, Y.,et al., 2012). The difference between the observed and the predicted deformation of IKAROS is believed to be caused by the bending stiffness present in the membrane. First, this study shows that the bending moment has strong effects on the attitude of the sail during its spin axis reorientation. Given the difficulty of measuring the actual bending stiffness of the membrane, it is neces
DegreeGRAU EN ENGINYERIA EN TECNOLOGIES AEROESPACIALS/GRAU EN ENGINYERIA FÍSICA
Location
1: 2 Chome Sengen, Tsukuba, Ibaraki 305-0047, Japó
URIhttp://hdl.handle.net/2117/170975
Collections
Share: