Misconceptions about sound among engineering students 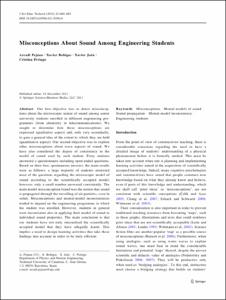 Except where otherwise noted, content on this work is licensed under a Creative Commons license : Attribution-NonCommercial-NoDerivs 3.0 Spain
Abstract
Our first objective was to detect misconceptions about the microscopic nature of sound among senior university students enrolled in different engineering programmes (from chemistry to telecommunications). We sought to determine how these misconceptions are expressed (qualitative aspect) and, only very secondarily, to gain a general idea of the extent to which they are held (quantitative aspect). Our second objective was to explore other misconceptions about wave aspects of sound. We have also considered the degree of consistency in the model of sound used by each student. Forty students answered a questionnaire including open-ended questions. Based on their free, spontaneous answers, the main results were as follows: a large majority of students answered most of the questions regarding the microscopic model of sound according to the scientifically accepted model; however, only a small number answered consistently. The main model misconception found was the notion that sound is propagated through the travelling of air particles, even in solids. Misconceptions and mental-model inconsistencies tended to depend on the engineering programme in which the student was enrolled. However, students in general were inconsistent also in applying their model of sound to individual sound properties. The main conclusion is that our students have not truly internalised the scientifically accepted model that they have allegedly learnt. This implies a need to design learning activities that take these findings into account in order to be truly efficient.
CitationPejuan, A. [et al.]. Misconceptions about sound among engineering students. "Journal of science education and technology", 2012, vol. 21, núm. 6, p. 669-685.
URIhttp://hdl.handle.net/2117/17097
DOI10.1007/s10956-011-9356-6
ISSN1059-0145
Collections
Share: