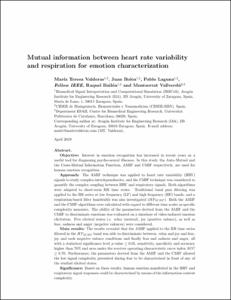 Document typeArticle
PublisherInstitute of Physics (IOP)
Rights accessOpen Access
Abstract
Objective: Interest in emotion recognition has increased in recent years as a useful tool for diagnosing psycho-neural illnesses. In this study, the auto-mutual and the cross-mutual information function, AMIF and CMIF respectively, are used for human emotion recognition. Approach: The AMIF technique was applied to heart rate variability (HRV) signals to study complex interdependencies, and the CMIF technique was considered to quantify the complex coupling between HRV and respiratory signals. Both algorithms were adapted to short-term RR time series. Traditional band pass filtering was applied to the RR series at low frequency (LF) and high frequency (HF) bands, and a respiration-based filter bandwidth was also investigated (). Both the AMIF and the CMIF algorithms were calculated with regard to different time scales as specific complexity measures. The ability of the parameters derived from the AMIF and the CMIF to discriminate emotions was evaluated on a database of video-induced emotion elicitation. Five elicited states i.e. relax (neutral), joy (positive valence), as well as fear, sadness and anger (negative valences) were considered. Main results: The results revealed that the AMIF applied to the RR time series filtered in the band was able to discriminate between the following: relax and joy and fear, joy and each negative valence conditions, and finally fear and sadness and anger, all with a statistical significance level p¿-value 0.05, sensitivity, specificity and accuracy higher than 70% and area under the receiver operating characteristic curve index AUC 0.70. Furthermore, the parameters derived from the AMIF and the CMIF allowed the low signal complexity presented during fear to be characterized in front of any of the studied elicited states. Significance: Based on these results, human emotion manifested in the HRV and respiratory signal responses could be characterized by means of the information-content complexity
CitationValderas, M. [et al.]. Mutual information between heart rate variability and respiration for emotion characterization. "Physiological measurement", 3 Setembre 2019, vol. 40, núm. 8.
URIhttp://hdl.handle.net/2117/170763
DOI10.1088/1361-6579/ab310a
ISSN0967-3334
Publisher versionhttps://iopscience.iop.org/article/10.1088/1361-6579/ab310a
Collections
Share: