Study: The ion propulsion system and trajectory of Dawn spacecraft 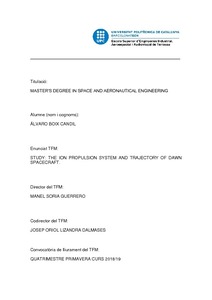 Dawn mission represents a revolutionary achievement in space research due to the fact that it was the first spacecraft to orbit two different extraterrestrial bodies, the asteroids Vesta and Ceres. It was managed by NASA’s JPL since its design, its launch in 2007 until its end in November 2018. Its objective was accomplished thanks to its Ion Propulsion System (IPS), which made possible the required manoeuvres and trajectories required to fulfil the mission’s objectives. This thesis focuses on the study of this innovative IPS, specifically on how it works during the mission and trying to understand why it operates in one way or another. Specially, the thesis centres in the most characteristic manoeuvre of the entire Dawn mission, the escape trajectory from Vesta to begin cruise to Ceres. In order to do this, the JPL’s SPICE library and toolkit is employed during the whole computations due to its high reliable source of data. From this information provided by SPICE, some calculations are performed regarding the Dawn IPS such as its trajectory, thrust force and even though its input power given by the spacecraft’s solar arrays. One of this thesis’s goals is to prove the reliability of this SPICE given data as well as its programming tools, which is confirmed after analysing the extracted results and comparing them to corroborated information. Furthermore, together with the SPICE computations, the same IPS parameters are estimated employing some theoretical models related to space manoeuvres similar to the ones performed by Dawn. The feasibility of the application of these established procedures is also wanted to be demonstrated in the case of each determined value. After the calculations, it is found out that these methodologies are validated due to the absolute similarity to the results obtained with SPICE. The estimated low thrust climb trajectory results in a truly approximate escape trajectory, and the thrust force value provided by a low thrust escape is incredibly similar to the SPICE one, even taking into account the definitely low values of ion propulsion compared to the common hydrazine thrusters. Last but not least, thanks to the determination of the IPS input power, given by the solar arrays’ orientation and efficiency, it is possible to verify the real values of the thrust force, which even improved the results extracted previously. This thesis means a first approach to the analysis of a space mission and its elements, and it represents a starting point into a more various or deeper study of the parameters of them
SubjectsSpace ships, Outer space -- Exploration, Jet propulsion, Astronaus, Espai exterior -- Exploració, Propulsió per reacció
URIhttp://hdl.handle.net/2117/170538