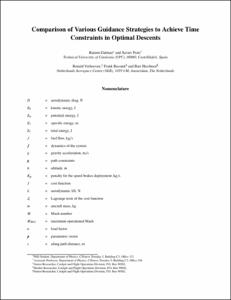 Verhoeven, Ronald
Bussink, Frank
Heesbeen, Bart
Document typeArticle
Rights accessOpen Access
Abstract
Continuous Descent Operations (CDOs) have been subject of extensive research in the last decades. Even if proving successful in reducing the environmental impact [1], such operations suffer from a well-known drawback: the loss of predictability from the Air Traffic Control (ATC) point of view, in terms of overfly-times at certain fixes along the route. Consequently, existing CDO implementations require ATC to introduce additional sequencing buffers to ensure safe separation among aircraft, thus reducing airport capacity. For all these reasons, in busy airports, CDOs are only feasible in off-peak hours, when the traffic demand is low [2]. In other to face this issue, several Air Traffic Management (ATM) concepts have been proposed that aim to enable CDOs also in high traffic demand scenarios. For instance, several works investigated the use of fixed Fight-Path-Angle (FPA) descents with time control to improve both spatial and temporal predictability [3, 4]. The disadvantage of fixed FPA descents is that predictability is achieved at the cost of thrust settings that might be different from idle. Another potential approach to enable CDOs in dense traffic scenarios consists of assigning controlled times of arrival (CTAs) to each aircraft at some strategic fixes for separation, negotiation starts with the on-board computation of the earliest and latest achievable times of arrival at the metering fix, and the subsequent down-link of this information to the ground automation system. Based on this feasible time window and the surrounding traffic a CTA is computed by a ground-based support tool, such as an arrival manager. Then, the incoming CTA is entered on-board as a Required Time of Arrival (RTA) into the FMS, and the on-board trajectory planner computes a new (optimal) trajectory plan starting at the current state, while satisfying the RTA and other operational constraints (e.g., altitude and speed constraints) [5].
CitationDalmau, R. [et al.]. Comparison of various guidance strategies to achieve time constraints in optimal descents. "Journal of guidance control and dynamics", 1 Gener 2019, vol. 42.
URIhttp://hdl.handle.net/2117/170305
DOI10.2514/1.G004019
ISSN0731-5090
Publisher versionhttps://arc.aiaa.org/doi/10.2514/1.G004019
Collections
Share: