Identifying the sources of flight inefficiency from historical aircraft trajectories. A set of distance- and fuel-based performance indicators for post-operational analysis. 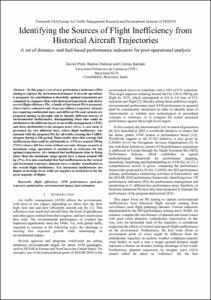 Except where otherwise noted, content on this work is licensed under a Creative Commons license : Attribution-NonCommercial-NoDerivs 3.0 Spain
ProjectAPACHE - Assessment of Performance in current ATM operations and of new Concepts of operations for its Holistic Enhancement (EC-H2020-699338)
Abstract
In this paper a set of new performance indicators (PIs) aiming to capture the environmental impact of aircraft operations is proposed. Its contribution is threefold: optimal trajectories are computed to compare them with historical trajectories and derive several flight efficiency PIs; a family of fuel-based PIs is proposed, where fuel is estimated only from surveillance trajectory datasets not requiring confidential data; and different PIs and variants are proposed aiming to decouple and to identify different sources of environmental inefficiencies, distinguishing those that could be attributed to the different layers of air traffic management (ATM), and those attributable to the airspace users (AUs). A case study is presented for two different days, where flight inefficiency was assessed with the proposed PIs for all traffic crossing the FABEC airspace during a 24h period. Main results show that average fuel inefficiencies that could be attributable to ATM are around 250 kg (7.8%) when a full free route without en-route charges scenario at maximum range operations is considered as reference for the optimal trajectories. AUs induced fuel inefficiencies (due to flying faster than the maximum range speed) have a mean around 100 kg (3%). It is also concluded that fuel inefficiencies in the vertical and horizontal trajectory domains have a similar contribution to the overall flight inefficiency. Yet, horizontal inefficiencies are higher at strategic level, while are negative at tactical level for the great majority of flights.
CitationPrats, X.; Dalmau, R.; Barrado, C. Identifying the sources of flight inefficiency from historical aircraft trajectories. A set of distance- and fuel-based performance indicators for post-operational analysis.. A: USA/Europe Air Traffic Management Research and Development Seminars. "Proceedings of the 13th USA/Europe Air Traffic Management Research and Development Seminar". 2019.
URIhttp://hdl.handle.net/2117/170271
Publisher versionhttp://www.atmseminarus.org/
Other identifiershttp://www.atmseminarus.org/13th-seminar/papers-and-presentations/
Collections
Share: