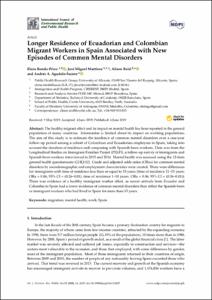 Reid, Alison
Agudelo Suárez, Andrés A.
Document typeArticle
Rights accessOpen Access
Abstract
The healthy migrant effect and its impact on mental health has been reported in the general population of many countries. Information is limited about its impact on working populations. The aim of this study is to estimate the incidence of common mental disorders over a one-year follow-up period among a cohort of Colombian and Ecuadorian employees in Spain, taking into account the duration of residence and comparing with Spanish-born workers. Data was from the Longitudinal Studies on Immigrant Families Project (PELFI), a follow-up survey of immigrants and Spanish-born workers interviewed in 2015 and 2016. Mental health was assessed using the 12-item general health questionnaire (GHQ-12). Crude and adjusted odds ratios (ORas) for common mental disorders by sociodemographic and employment characteristics were created. There were differences for immigrants with time of residence less than or equal to 15 years (time of residence 11–15 years: ORa = 0.06, 95% CI = (0.26–0.01); time of residence 1–10 years: ORa = 0.06, 95% CI = (0.36–0.01)). There was evidence of a healthy immigrant worker effect, as newer arrivals from Ecuador and Columbia to Spain had a lower incidence of common mental disorders than either the Spanish-born or immigrant workers who had lived in Spain for more than 15 years
CitationRonda, E. [et al.]. Longer residence of ecuadorian and colombian migrant workers in Spain associated with new episodes of common mental disorders. "International journal of environmental research and public health", 1 Juny 2019, vol. 16, núm. 11, p. 1-10.
URIhttp://hdl.handle.net/2117/170167
DOI10.3390/ijerph16112027
ISSN1660-4601
Publisher versionhttps://www.mdpi.com/1660-4601/16/11/2027
Collections
Share: