The route of a homeless digital object from 'Closeland' to 'Openland' 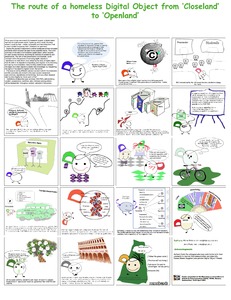 Show full item record
Melero, Remedios
Prats Prat, Jordi
Document typeConference lecture
Rights accessOpen Access
Abstract
Once upon a time, as a result of a research project, a digital object was born in a toll access world, it grew up and it could not place where it could be free - visible, accessible and free of barriers. That is how it started its journey from ‘closeland’ to ‘openland’. During the journey it discovered a whole landscape of new concepts and forms which helped it be open to the scientific world. This is the summary of the story of a homeless digital object, which became an open access resource, improving its chances of availability and preservation. The aim of this presentation is to illustrate some concepts within the process of archiving digital objects in repositories to make them clear, following the story of digital object from its birth to its deposit in a repository, and beyond, to its discovery and use by more scientists, freely building relationships between the object and other objects to create new knowledge, but respecting the rights of the object’s original owner – the author. The story is told by different cartoon scenes in which the characters and the scenarios are related to the open access movement, open archives, repositories and archiving. As in any other classical tale the story begins by “once upon a time”. Definitions of ideas like open archives, OAI-PMH, self-archiving, curation, preservation, workflow, sets, bitstream among others will be represented throughout cartoon pictures in the panels.
URIhttp://hdl.handle.net/2117/1701
Collections
Share: