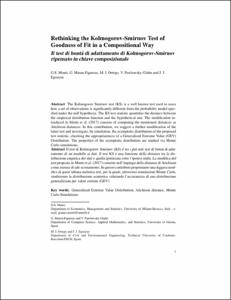 Document typeConference report
PublisherPearson
Rights accessOpen Access
Abstract
The Kolmogorov Smirnov test (KS) is a well known test used to asses how a set of observations is significantly different from the probability model specified under the null hypothesis. The KS test statistic quantifies the distance between the empirical distribution function and the hypothetical one. The modification introduced in Monti et al. (2017) consists of computing the mentioned distances as Aitchison distances. In this contribution, we suggest a further modification of the latter test and investigate, by simulation, the asymptotic distribution of the proposed test statistic, checking the appropriateness of a Generalized Extreme Value (GEV) Distribution. The properties of the asymptotic distribution are studied via Monte Carlo simulations.
CitationMonti, G. S. [et al.]. Rethinking the Kolmogorov-Smirnov test of Goodness of fit in a compositional way. A: Scientific meeting of the Italian Statistical Society. "49th Scientific meeting of the Italian Statistical Society (SIS 2018): Palermo, Italy: 20-22 june, 2018: book of short papers". Pearson, 2018, p. 1-6.
URIhttp://hdl.handle.net/2117/169647
ISBN9788891910233
Other identifiershttp://meetings3.sis-statistica.org/index.php/sis2018/49th/search/authors/view?firstName=Gianna&middleName=&lastName=Monti&affiliation=University%20of%20Milano%20Bicocca&country=
Collections
Share: