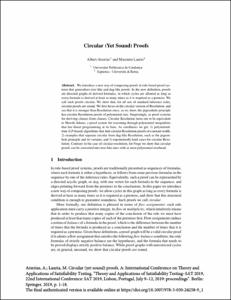 Document typeConference report
PublisherSpringer
Rights accessOpen Access
European Commission's projectAUTAR - A Unified Theory of Algorithmic Relaxations (EC-H2020-648276)
Abstract
We introduce a new way of composing proofs in rule-based proof systems that generalizes tree-like and dag-like proofs. In the new definition, proofs are directed graphs of derived formulas, in which cycles are allowed as long as every formula is derived at least as many times as it is required as a premise. We call such proofs circular. We show that, for all sets of standard inference rules, circular proofs are sound. We first focus on the circular version of Resolution, and see that it is stronger than Resolution since, as we show, the pigeonhole principle has circular Resolution proofs of polynomial size. Surprisingly, as proof systems for deriving clauses from clauses, Circular Resolution turns out to be equivalent to Sherali-Adams, a proof system for reasoning through polynomial inequalities that has linear programming at its base. As corollaries we get: (1) polynomial-time (LP-based) algorithms that find circular Resolution proofs of constant width, (2) examples that separate circular from dag-like Resolution, such as the pigeonhole principle and its variants, and (3) exponentially hard cases for circular Resolution. Contrary to the case of circular resolution, for Frege we show that circular proofs can be converted into tree-like ones with at most polynomial overhead.
CitationAtserias, A.; Lauria, M. Circular (yet sound) proofs. A: International Conference on Theory and Applications of Satisfiability Testing. "Theory and Applications of Satisfiability Testing–SAT 2019, 22nd International Conference: SAT 2019, Lisbon, Portugal, July 9–12, 2019: proceedings". Berlín: Springer, 2019, p. 1-18.
URIhttp://hdl.handle.net/2117/169630
DOI10.1007/978-3-030-24258-9_1
ISBN978-3-030-24258-9
Publisher versionhttps://link.springer.com/chapter/10.1007/978-3-030-24258-9_1
Collections
Share: