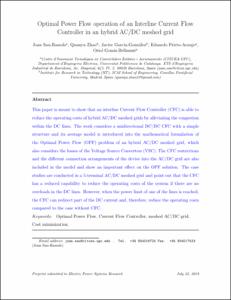 Except where otherwise noted, content on this work is licensed under a Creative Commons license : Attribution-NonCommercial-NoDerivs 3.0 Spain
Abstract
This paper is meant to show that an interline Current Flow Controller (CFC) is able to reduce the operating costs of hybrid AC/DC meshed grids by alleviating the congestion within the DC lines. The work considers a unidirectional DC/DC CFC with a simple structure and its average model is introduced into the mathematical formulation of the Optimal Power Flow (OPF) problem of an hybrid AC/DC meshed grid, which also considers the losses of the Voltage Source Converters (VSC). The CFC restrictions and the different connection arrangements of the device into the AC/DC grid are also included in the model and show an important effect on the OPF solution. The case studies are conducted in a 5-terminal AC/DC meshed grid and point out that the CFC has a reduced capability to reduce the operating costs of the system if there are no overloads in the DC lines. However, when the power limit of one of the lines is reached, the CFC can redirect part of the DC current and, therefore, reduce the operating costs compared to the case without CFC.
CitationSau, J. [et al.]. Optimal power flow operation of an interline current flow controller in an hybrid AC/DC meshed grid. "Electric power systems research", 1 Desembre 2019, vol. 177.
URIhttp://hdl.handle.net/2117/169556
DOI10.1016/j.epsr.2019.105935
ISSN0378-7796
Publisher versionhttps://www.sciencedirect.com/science/article/abs/pii/S0378779619302548
Collections
Share: