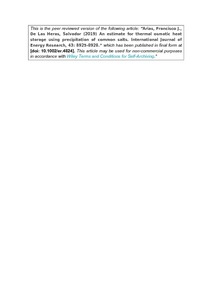 Except where otherwise noted, content on this work is licensed under a Creative Commons license : Attribution-NonCommercial-NoDerivs 3.0 Spain
Abstract
In this brief note, a first assessment on the possibilities for thermal osmotic storage by harnessing the thermal dependence of the solubility of common salts as an alternative method to sensible heat storage is discussed. In a recent study it was found that such a dependence could be used to run a heat powered cycle (osmotic heat engine). The question raised then is whether that approach could be suitable for thermal energy storage as well. The attractiveness of such a possibility lies in the capability to store energy for an indefinite period of time without using expensive isolation systems if one considers that osmotic energy only is released when both streams with different salinities are brought together. Utilizing a simplified model, a comparative study with sensible heat storage was performed. It is shown that thermal osmotic storage via thermal precipitation of common salts could be an attractive option when long thermal storage (days) and compactness is desired
CitationArias, F.J.; De Las Heras, S.A. An estimate for thermal osmotic heat storage using precipitation of common salts. "International journal of energy research", 2019, 43 : 8925-8928
URIhttp://hdl.handle.net/2117/169539
DOI10.1002/er.4824
ISSN0363-907X
Publisher versionhttps://onlinelibrary.wiley.com/doi/10.1002/er.4824
Collections
Share: