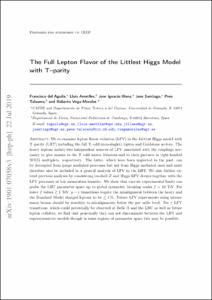 Illana, José Ignacio
Santiago, Jose
Talavera, Pere
Vega-Morales, Roberto
Document typeArticle
PublisherSpringer
Rights accessOpen Access
Abstract
We re-examine lepton flavor violation (LFV) in the Littlest Higgs model with T-parity (LHT) including the full T-odd (non-singlet) lepton and Goldstone sectors. The heavy leptons induce two independent sources of LFV associated with the couplings necessary to give masses to the T-odd mirror fermions and to their partners in right-handed SO(5) multiplets, respectively. The latter, which have been neglected in the past, can be decoupled from gauge mediated processes but not from Higgs mediated ones and must therefore also be included in a general analysis of LFV in the LHT. We also further extend previous analyses by considering on-shell Z and Higgs LFV decays together with the LFV processes at low momentum transfer. We show that current experimental limits can probe the LHT parameter space up to global symmetry breaking scales f ~ 10 TeV. For lower f values ¿ 1 TeV, µ - e transitions require the misalignment between the heavy and the Standard Model charged leptons to be ¿ 1%. Future LFV experiments using intense muon beams should be sensitive to misalignments below the per mille level. For t LFV transitions, which could potentially be observed at Belle II and the LHC as well as future lepton colliders, we find that generically they can not discriminate between the LHT and supersymmetric models though in some regions of parameter space this may be possible.
Citationdel Aguila , F. [et al.]. The full lepton flavor of the littlest Higgs model with T-parity. "Journal of high energy physics", 25 Juliol 2019, núm. 154, p. 1-44.
URIhttp://hdl.handle.net/2117/169532
DOI10.1007/JHEP07(2019)154
ISSN1029-8479
Publisher versionhttps://link.springer.com/article/10.1007/JHEP07(2019)154
Collections
Share: