Spatial and temporal controls on the distribution of indium in xenothermal vein deposits: the Huari Huari district, Potosí, Bolivia 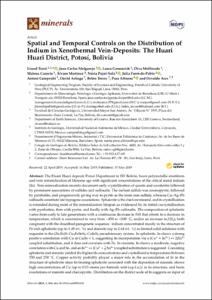 Arce Burgoa, Osvaldo R.
Document typeArticle
Rights accessOpen Access
Abstract
The Huari Huari deposit, Potosí Department in SW Bolivia, hosts polymetallic stratiform and vein mineralization of Miocene age with significant concentrations of the critical metal indium (In). Vein mineralization records document early crystallization of quartz and cassiterite followed by prominent associations of sulfides and sulfosalts. The earliest sulfide was arsenopyrite, followed by pyrrhotite, and progressively giving way to pyrite as the main iron sulfide, whereas Cu–Ag–Pb sulfosalts constitute late hypogene associations. Sphalerite is the chief ore mineral, and its crystallization is extended during most of the mineralization lifespan as evidenced by its initial cocrystallization with pyrrhotine, then with pyrite, and finally with Ag–Pb sulfosalts. The composition of sphalerite varies from early to late generations with a continuous decrease in FeS that attests to a decrease in temperature, which is constrained to vary from ~450 to <200 °C, and/or an increase in f(S2), both congruent with the described paragenetic sequence. Indium concentrated mostly in the structure of Fe-rich sphalerite (up to 3.49 wt. %) and stannite (up to 2.64 wt. %) as limited solid solutions with roquesite in the (Zn,Fe)S–Cu2FeSnS4–CuInS2 pseudoternary system. In sphalerite, In shows a strong positive correlation with Cu at Cu/In = 1, suggesting its incorporation via a (Cu+ + In3+) ¿ 2Zn2+ coupled substitution, and it does not correlate with Fe. In stannite, In shows a moderate, negative correlation with Cu and Sn, and an In3+ ¿ (Cu+ + ½ Sn4+) coupled substitution is suggested. Coexisting sphalerite and stannite yielded the highest In concentrations and crystallized at temperatures between 350 and 250 °C. Copper activity probably played a major role in the accumulation of In in the structure of sphalerite since In-bearing sphalerite coexisted with the deposition of stannite, shows high concentrations of Cu (up to 0.13 atoms per formula unit (a.p.f.u.)) in its structure, and hosts exsolutions of stannite and chalcopyrite. Distribution on the district scale of In suggests an input of hydrothermal fluids richer in Cu in the central position of the mineralizing system, represented by the Antón Bravo vein.
Location
1: Província de Tomás Frías, Bolívia
CitationTorró, L. [et al.]. Spatial and temporal controls on the distribution of indium in xenothermal vein deposits: the Huari Huari district, Potosí, Bolivia. "Minerals", 17 Maig 2019, vol. 9, núm. 5, p. 1-38.
URIhttp://hdl.handle.net/2117/169494
DOI10.3390/min9050304
ISSN2075-163X
Publisher versionhttps://www.mdpi.com/2075-163X/9/5/304
Collections
Share: