Impact of signal quantization on the performance of RFI mitigation algorithms 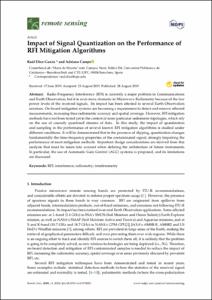 Radio Frequency Interference (RFI) is currently a major problem in Communications and Earth Observation, but it is even more dramatic in Microwave Radiometry because of the low power levels of the received signals. Its impact has been attested in several Earth Observation missions. On-board mitigation systems are becoming a requirement to detect and remove affected measurements, increasing thus radiometric accuracy and spatial coverage. However, RFI mitigation methods have not been tested yet in the context of some particular radiometer topologies, which rely on the use of coarsely quantized streams of data. In this study, the impact of quantization and sampling in the performance of several known RFI mitigation algorithms is studied under different conditions. It will be demonstrated that in the presence of clipping, quantization changes fundamentally the time-frequency properties of the contaminated signal, strongly impairing the performance of most mitigation methods. Important design considerations are derived from this analysis that must be taken into account when defining the architecture of future instruments. In particular, the use of Automatic Gain Control (AGC) systems is proposed, and its limitations are discussed
CitationDíez, R.; Camps, A. Impact of signal quantization on the performance of RFI mitigation algorithms. "Remote sensing", 1 Gener 2019, vol. 11, núm. 17, p. 1-21.
URIhttp://hdl.handle.net/2117/169415
DOI10.3390/rs11172023
ISSN2072-4292
Publisher versionhttps://www.mdpi.com/2072-4292/11/17/2023