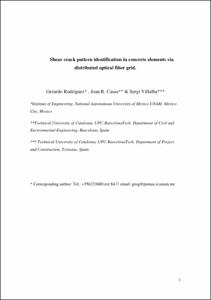 Document typeArticle
Rights accessOpen Access
Project
Abstract
An experimental methodology to obtain the shear cracking pattern in concrete elements is presented. The method is based on the use of Distributed Optical Fiber Sensors (DOFS) connected to an Optical Backscattered Reflectometer (OBR). Using this OBR system and a 2D grid conformed by one or two DOFS, the crack patterns of three partially pre-stressed concrete (PPC) beams subjected experimentally to shear failure, were obtained for increasing level of load. The 2D distributed fiber optic sensoring mesh was formed by attaching the fiber to the shear span of each beam using an epoxy adhesive. The importance of a correct DOFS attaching procedure to the concrete surface to obtain accurate results is described, and the principal advantages of DOFS to complement the use of discrete sensors in concrete experimental shear tests are shown. The proposed technique is a powerful tool to be implemented in the structural health monitoring in shear of concrete structures, where the variable inclined cracks are difficult to monitor by other experimental techniques using discrete sensors.
Description
This is an Accepted Manuscript of an article published by Taylor & Francis Group in "Structure and infrastructure engineering: maintenance, management, life-cycle design and performance" on 2019, available online at: http://www.tandfonline.com/10.1080/15732479.2019.1640256
CitationRodríguez , G.; Casas, J.; Villalba, S. Shear crack pattern identification in concrete elements via distributed optical fibre grid. "Structure and infrastructure engineering: maintenance, management, life-cycle design and performance", Desembre 2019, vol. 15, núm. 12, p. 1630-1648.
URIhttp://hdl.handle.net/2117/169337
DOI10.1080/15732479.2019.1640256
ISSN1573-2479
Publisher versionhttps://www.tandfonline.com/doi/abs/10.1080/15732479.2019.1640256?journalCode=nsie20
Collections
Share: