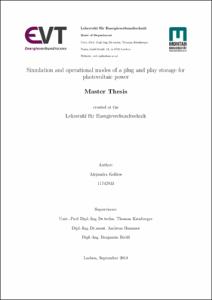 Show full item record
Kollros, Alejandra
Tutor / director / evaluatorKienberger, Thomas
CovenanteeMontanuniversität Leoben
Document typeMaster thesis
Rights accessOpen Access
Abstract
Renewable energy has become an important topic of today’s world. Renewable energy resources are inexhaustible, clean and they can be used in a decentralized way, i.e they can be generated and consumed directly in the same place, for example in domestic applications. In the last decades, the share of renewable energy in the energy mix has increased considerably, mainly because of the strict legislations and policies involving climate and energy goals and targets, but also without question, the increased self awareness and public perception regarding climate change and energy savings, in the citizens and as well in businesses or industries, therefore supporting the transition to a decarbonized energy system. However, since renewable energy often relies on weather conditions for the generation of power (e.g. in photovoltaic (PV) systems during the nighttime or during cloudy days where there is none or little energy production), problems such as unpredictability and unreliability emerge. Therefore, energy storage systems play an important role in creating a flexible and reliable system. In this work, a model of a complete domestic PV-battery system is modeled and simulated, whose goal is to develop a realistic model of a Plug & Play Storage of Photovoltaic Power (P 3P), a product that is currently being made by a start-up company in Graz. Said model firstly includes a PV module modeled in Simulink which also includes an irradiance model that relies in real measured data. Secondly, a battery model has been implemented in Matlab by means of power and energy balances, with one control strategy which also includes four different operational modes and additionally aging effects have been implemented. Thirdly, based on real data and by means of curve fitting, an inverter model has also been developed in Matlab. The special feature of the aforementioned system is that energy can be purchased from the grid but the surplus of generated energy cannot be fed into it. Finally, a sensitivity analysis was carried out to quantify and evaluate the influence of changing the predefined standard parameters over the whole system by comparing it to a performance parameter, enabling to find the best system configuration for the considered scenario.
SubjectsPhotovoltaic power generation, Energia solar fotovoltaica
URIhttp://hdl.handle.net/2117/169226
Collections
Share: