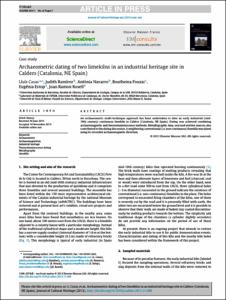 Estop, Eugènia Estop
Fouzaic, Boutheina
Document typeArticle
Rights accessOpen Access
Abstract
An archaeometric multi-technique approach has been undertaken to characterize and date an early industrial limekiln in Calders (Catalonia, NE Spain). Data on the working conditions were inferred from X-ray diffraction and Mössbauer spectrometry. Dating was achieved combining archaeomagnetic, thermoluminescence and metallographic data with oral and written sources. The ensemble of results indicates that the kiln was under operation between 1873 and 1899 and its abandonment possibly occurred not later than 1904 and certainly not later than the forties of the 20th century. The firing chamber of a neighboring traditional limekiln was dated using its stored archaeomagnetic direction. The results indicate that it was last used during the mid-19th century.
CitationCasas, L. [et al.]. Archeometric dating of two limekilns in an industrial heritage site in Calders (Catalonia, NE Spain). "Journal of cultural heritage", 1 Setembre 2014, vol. 15, núm. 5, p. 550-556.
URIhttp://hdl.handle.net/2117/169167
DOI10.1016/j.culher.2013.11.008
ISSN1296-2074
Publisher versionhttp://www.sciencedirect.com/science/article/pii/S1296207413002173
Collections
Share: