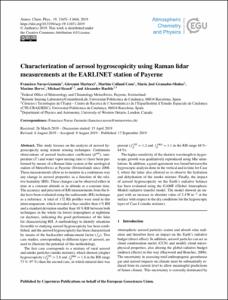 Haefele, Alexander
Document typeArticle
PublisherEuropean Geosciences Union (EGU)
Rights accessOpen Access
European Commission's projectACTRIS-2 - Aerosols, Clouds, and Trace gases Research InfraStructure (EC-H2020-654109)
GRASP-ACE - Development of GRASP radiative transfer code for the retrieval of aerosol microphysics vertical-profiles from space measurements and its impact in ACE mission (EC-H2020-778349)
Abstract
This study focuses on the analysis of aerosol hygroscopicity using remote sensing techniques. Continuous observations of aerosol backscatter coefficient (ßaer), temperature (T) and water vapor mixing ratio (r) have been performed by means of a Raman lidar system at the aerological station of MeteoSwiss at Payerne (Switzerland) since 2008. These measurements allow us to monitor in a continuous way any change in aerosol properties as a function of the relative humidity (RH). These changes can be observed either in time at a constant altitude or in altitude at a constant time. The accuracy and precision of RH measurements from the lidar have been evaluated using the radiosonde (RS) technique as a reference. A total of 172 RS profiles were used in this intercomparison, which revealed a bias smaller than 4¿%¿RH and a standard deviation smaller than 10¿%¿RH between both techniques in the whole (in lower) troposphere at nighttime (at daytime), indicating the good performance of the lidar for characterizing RH. A methodology to identify situations favorable to studying aerosol hygroscopicity has been established, and the aerosol hygroscopicity has been characterized by means of the backscatter enhancement factor (fß). Two case studies, corresponding to different types of aerosol, are used to illustrate the potential of this methodology. The first case corresponds to a mixture of rural aerosol and smoke particles (smoke mixture), which showed a higher hygroscopicity (f355ß=2.8 and f1064ß=1.8 in the RH range 73¿%–97¿%) than the second case, in which mineral dust was present (f355ß=1.2 and f1064ß=1.1in the RH range 68¿%–84¿%). The higher sensitivity of the shortest wavelength to hygroscopic growth was qualitatively reproduced using Mie simulations. In addition, a good agreement was found between the hygroscopic analysis done in the vertical and in time for Case I, where the latter also allowed us to observe the hydration and dehydration of the smoke mixture. Finally, the impact of aerosol hygroscopicity on the Earth's radiative balance has been evaluated using the GAME (Global Atmospheric Model) radiative transfer model. The model showed an impact with an increase in absolute value of 2.4¿W¿m-2 at the surface with respect to the dry conditions for the hygroscopic layer of Case I (smoke mixture).
CitationNavas, F. [et al.]. Characterization of aerosol hygroscopicity using Raman lidar measurements at the EARLINET station of Payerne. "Atmospheric chemistry and physics", 17 Setembre 2019, vol. 19, núm. 18, p. 11651-11668.
URIhttp://hdl.handle.net/2117/169140
DOI10.5194/acp-19-11651-2019
ISSN1680-7324
Publisher versionhttps://www.atmos-chem-phys.net/19/11651/2019/
Collections
Share: