Development of sensorized feet for sewer inspection with quadrupedal robots 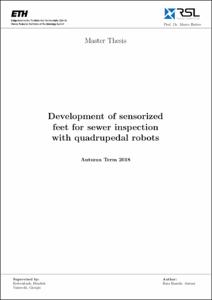 Show full item record
Ruiz Bassols, Antoni
Tutor / director / evaluatorKolvenbach, Hendrik
CovenanteeEidgenössische Technische Hochschule Zürich
Document typeMaster thesis
Rights accessOpen Access
Abstract
The main purpose of the project is to integrate sensors in the feet of the ANYmal, a quadrupedal robot capable of performing autonomous inspections in harsh environments, with the goal of performing sewer inspections included in the subTerranean Haptic INvestiGator project (THING). The objectives of the project have been divided between: the development of a haptic perception application which allows the ANYmal to differentiate between surfaces while scratching its feet; and the integration of sensors in the ANYmal’s feet to perform a water quality analysis in the sewer. To achieve the desired haptic perception, a foot mockup has been built to test the sensors selected for this application (piezo vibration sensors and an inertial measurement unit). The testing has provided promising results to validate the use of these sensors. After the results obtained with the foot mockup, these sensors have been integrated in the foot sole of the ANYmal and another a test has been performed, making the foot sole slide manually. The results of this test, again promising, have been verified using the Classification Learner App from the Machine Learning Toolbox of Matlab. Finally, a waterproof case has been designed to be attached at the frontal right foot of the ANYmal with the purpose of housing all these sensors. Since the sewer inspection also contains the water quality analysis, another case, which will be attached in the frontal left foot of the ANYmal, has been designed to house the selected sensors capable of measuring properties of the water such as the temperature and the electrical conductivity. The project has been concluded by performing a scratching motion test with the prototype attached in the feet of the ANYmal. Therefore, this project contributes to the THING project by giving the ANYmal the possibility of performing autonomous sewer inspections.
SubjectsRobots, Robots
URIhttp://hdl.handle.net/2117/169133
Collections
Share: