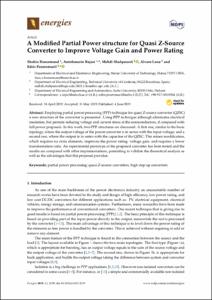 Pouresmaeil, Edris
Document typeArticle
Rights accessOpen Access
Abstract
Employing partial power processing (PPP) technique for quasi Z-source converter (QZSC) a new structure of the converter is presented. Using PPP technique although eliminates electrical insolation, but permits reducing voltage and current stress at the semiconductors, if compared with full power proposals. In this work, two PPP structures are discussed: A first one, similar to the basic topology, where the output voltage of the power converter is in series with the input voltage; and a second one, where the output is in series with the capacitor of the QZSC. This minor modification, which requires no extra elements, improves the power rating, voltage gain, and requires a lower transformation ratio. An experimental prototype of the proposed converter has been tested and the results are compared with other implementations, permitting to validate the theoretical analysis as well as the advantages that this proposal provides.
CitationHonarmand, S. [et al.]. A modified partial power structure for quasi Z-source converter to improve voltage gain and power rating. "Energies", 1 Juny 2019, vol. 12, núm. 11, p. 1-17.
URIhttp://hdl.handle.net/2117/169075
DOI10.3390/en12112139
ISSN1996-1073
Publisher versionhttps://www.mdpi.com/1996-1073/12/11/2139
Collections
Share: