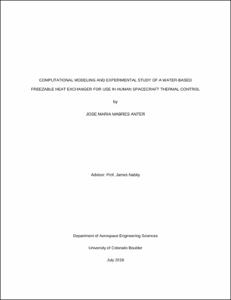 Except where otherwise noted, content on this work is licensed under a Creative Commons license : Attribution-NonCommercial-NoDerivs 3.0 Spain
Abstract
A spacecraft thermal control system must keep the cabin and electronic equipment within operational temperature ranges by transporting heat out of the spacecraft. This process is generally accomplished with a series of heat exchangers. At the International Space Station, a water loop collects the heat loads and via a closed heat exchanger, this heat is transferred to an external anhydrous ammonia loop, where it circulates through large radiators located on the exterior of the Space Station, rejecting the heat by radiation to space. A single loop instead of the actual dual-loop would simplify and reduce the complexity of the thermal control system. Besides, given the susceptibility of water to freeze and the toxicity of exposing the crew to ammonia it is hard to design a single-loop architecture. A self-regulating freezable heat exchanger was designed in the past, to passively maintain and regulate thermal control through water ice buildup within the heat exchanger structure. In order to determine the feasibility and effectiveness of this technology, a computational model and experimental tests are needed. This is the main goal of this thesis work. A computational model was developed with the ANSYS Fluent Software. The heat exchanger was simulated with different boundary conditions, and the influence of some parameters to the results was analyzed. A big focus of the analysis has been the study of the ice formation, and its wavy behavior. 4 Some experiments were made with the heat exchanger test apparatus, which was assembled again for this thesis work. Given the results of the simulation part, the experiments were oriented to understand the ice formation behavior. Some oscillations in the surface temperature measurements at the heat exchanger seem to confirm our hypothesis about the wavy behavior of the ice formation. These results contribute to the growing body of work to develop and characterize freezable heat exchangers for spacecraft thermal control.
SubjectsAerospace engineering, Enginyeria aeroespacial
DegreeMÀSTER UNIVERSITARI EN ENGINYERIA INDUSTRIAL (Pla 2014)
URIhttp://hdl.handle.net/2117/169074
Collections
Share: