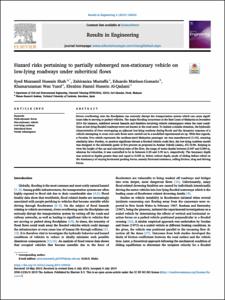 Except where otherwise noted, content on this work is licensed under a Creative Commons license : Attribution-NonCommercial-NoDerivs 3.0 Spain
Abstract
Rivers overflowing onto the floodplains can seriously disrupt the transportation system which can cause significant risks to moving or parked vehicles. The major flooding occurrence at the East Coast of Malaysia in December 2014 for instance, exhibited several hazards and fatalities involving vehicle submergence when the road conditions at low-lying flooded roadways were not known to the road users. To imitate a similar situation, the hydraulic characteristics of river overtopping an adjacent low-lying roadway during floods and the dynamics response of a vehicle attempting to cross over such flows were carried out in a modelled experimental set up. With that regards, a Perodua Viva which represents the medium-sized Malaysian passenger car was manufactured (1:10), ensuring similarity laws. Further, to monitor significant threats a flooded vehicle could face, the low-lying roadway model was designed to the allowable grade of five percent as proposed in Arahan Teknik (Jalan), ATJ 8/86. Keeping in view the height of the car and subcritical state of the flow, the range of water depths between 0.047 and 0.089 m, whereas for velocities, it was controlled to be in between 0.20 and 0.39 m/s, respectively. The buoyancy depth was noticed at depths greater than and equal to 0.055 m. Below critical depth, mode of sliding failure relied on the dominancy of varying horizontal pushing forces, namely frictional resistance, rolling friction, drag and driving forces.
CitationShah, S. [et al.]. Hazard risks pertaining to partially submerged non-stationary vehicle on low-lying roadways under subcritical flows. "Results in Engineering", Setembre 2019, vol. 3, p. 100032-1-100032-7.
URIhttp://hdl.handle.net/2117/168992
DOI10.1016/j.rineng.2019.100032
ISSN2590-1230
Publisher versionhttps://www.sciencedirect.com/science/article/pii/S2590123019300325
Collections
Share: