A framework for the definition of metrics for actor-dependency models 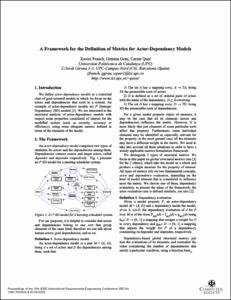 Document typeConference report
PublisherInstitute of Electrical and Electronics Engineers (IEEE)
Rights accessOpen Access
All rights reserved. This work is protected by the corresponding intellectual and industrial property rights. Without prejudice to any existing legal exemptions, reproduction, distribution, public communication or transformation of this work are prohibited without permission of the copyright holder
Abstract
The authors define actor-dependency models as a restricted class of goal-oriented models in which we focus on the actors and dependencies that exist in a system. An example of actor-dependency models are i* strategic dependency (SD) models (Yu, 1995). The structural analysis of actor-dependency models with respect some properties considered of interest for the modelled system (such as security, accuracy or efficiency), using some adequate metrics defined in terms of the elements of the model.
CitationFranch, X.; Grau, G.; Quer, C. A framework for the definition of metrics for actor-dependency models. A: IEEE International Requirements Engineering Conference. "12th IEEE International Requirements Engineering Conference: Kyoto, Japan, September 6-10, 2004: proceedings". Institute of Electrical and Electronics Engineers (IEEE), 2004, p. 348-349.
URIhttp://hdl.handle.net/2117/168961
DOI10.1109/ICRE.2004.1335695
ISBN0-7695-2174-6
Publisher versionhttps://ieeexplore.ieee.org/document/1335695
Collections
Share: