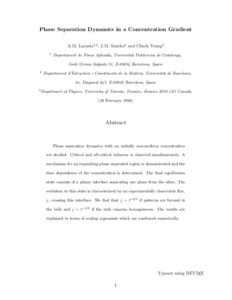 Sancho, Jose Maria
Yeung, C.
Document typeArticle
PublisherEDP Sciences
Rights accessOpen Access
Abstract
Phase separation dynamics with an initially nonuniform concentration are studied. Critical and off-critical behavior is observed simultaneously. A mechanism for an expanding phase-separated region is demonstrated and the time dependence of the concentration is determined. The final equilibrium state consists of a planar interface separating one phase from the other. The evolution to this state is characterized by an experimentally observable flux, j, crossing this interface. We find that j ~ t−2/3 if patterns are formed in the bulk and j ~ t−1/2 if the bulk remains homogeneous. The results are explained in terms of scaling arguments which are confirmed numerically.
CitationLacasta, A.M.; Sancho, J.M.; Yeung, C. "Phase separation dynamics in a concentration gradient". Europhysics Letters, 1994, vol. 27, núm. 4, p. 291-297. ISSN:0295-5075
URIhttp://hdl.handle.net/2117/16882
ISSN0295-5075
Collections
Share: