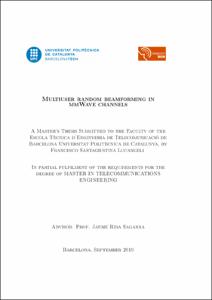 Except where otherwise noted, content on this work is licensed under a Creative Commons license : Attribution-NonCommercial-NoDerivs 3.0 Spain
Abstract
Cellular communications exploiting the mmWaves frequency range are com- ing within our technological reach. However the specificities of propagation at these frequencies calls for new transmission schemes. Concerning the downlink there are signs that opportunistic beamforming may be an effec- tive solution. This thesis aims to show that in mmWaves channels, schemes based on randomly-directional beamforming allow to harness both the spatial multiplexing and multiuser diversity characterizing the broadcast channel by using only limited feedback and a simple transmitter architecture. It is well- known that performances of random beamforming schemes become optimal when the number of users tends to infinity. Hence, the number of necessary users with respect to the number of transmitting antennas is investigated and the necessity of a linear relation between the two is confirmed. Opportunis- tic beamforming is furthermore analysed under the aspect of fairness. The possibility to combine it with proportional-fair scheduling with only a small sum-rate loss is shown. Finally, the allocation of multiple users per beam is considered and the advantage of NOMA over OMA under the point of view of fairness is displayed.
SubjectsWireless communication systems, Antennas (Electronics), Comunicació sense fil, Sistemes de, Antenes (Electrònica)
DegreeMÀSTER UNIVERSITARI EN ENGINYERIA DE TELECOMUNICACIÓ (Pla 2013)
URIhttp://hdl.handle.net/2117/168787
Collections
Share: