Antimicrobial activity of poly(3,4-ethylenedioxythiophene) n-doped with a pyridinium-containing polyelectrolyte 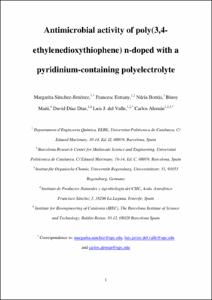 Document typeArticle
Rights accessOpen Access
Abstract
In spite of p-doped conducting polymers having been widely studied in the last decades and many applications having been developed, studies based on n-doped conducting polymers are extremely scarce. This fact is even more evident when it comes to conducting polymers n-doped with polycations, even though polyanions, such as poly(styrenesulfonate), are often used to obtain p-doped conducting polymers. In this work poly(pyridinium-1,4-diyliminocarbonyl-1,4-phenylene-methylene chloride), abbreviated as P(Py-1,4-P), has been used to prepare n-doped poly(3,4-ethylenedioxythiophene) (PEDOT) electrodes by applying a reduction potential to a de-doped PEDOT film in a P(Py-1,4-P) water solution. The utilization of this cationic polyelectrolyte as an n-dopant agent results in drastic superficial changes, as is observed by comparing the morphology, topography and wettability of p-doped, de-doped and n-doped PEDOT. Cytotoxicity, cell adhesion and cell proliferation assays, which have been conducted using epithelial and fibroblast cell lines, show that the amount of P(Py-1,4-P) in the re-doped PEDOT films is below that required to observe a cytotoxic harmful response and that n-doped PEDOT:P(Py-1,4-P) films are biocompatible. The non-specific bacteriostatic properties of n-doped PEDOT:P(Py-1,4-P) films have been demonstrated against E. coli and S. aureus bacteria (Gram-negative and Gram-positive, respectively) using bacterial growth curves and adhesion assays. Although the bacteriostatic effect is in part due to the conducting polymer, as is proved by results for p-doped and de-doped PEDOT, the incorporation of P(Py-1,4-P) through the re-doping process greatly enhances this antimicrobial behaviour. Thus, only a small concentration of this cationic polyelectrolyte (~0.1 mM) is needed to inhibit bacterial growth.
CitationSanchez, M. [et al.]. Antimicrobial activity of poly(3,4-ethylenedioxythiophene) n-doped with a pyridinium-containing polyelectrolyte. "Soft matter", 30 Agost 2019, vol.15, num.38, p. 7695-7703
URIhttp://hdl.handle.net/2117/168783
DOI10.1039/C9SM01491H
ISSN1744-683X
Publisher versionhttps://pubs.rsc.org/en/content/articlelanding/2019/sm/c9sm01491h#!divAbstract
Collections
Share: