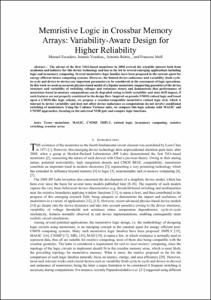 Document typeArticle
Rights accessOpen Access
Abstract
The advent of the first TiO 2 -based memristor in 2008 revived the scientific interest both from academia and industry for this device technology and has so far led to several emerging applications including logic and in-memory computing. Several memristive logic families have been proposed in the current quest for energy-efficient future computing systems. However, the limited device endurance and variability (both cycle-to-cycle and device-to-device) are important parameters to be considered in the assessment of logic operations. In this work, we used an accurate physics-based model of a bipolar memristor (supporting parasitics of the device structure and variability of switching voltages and resistance states) and demonstrate that performance of memristor-based in-memory computations can de degraded owing to both variability and state drift impact, if such features are not properly considered in the design flow. Inspired on pseudo-NMOS ratioed logic and based upon a previous CMOS-like logic scheme, we propose a crossbar-compatible memristive ratioed logic style which is tolerant to device variability and does not affect device endurance as computations do not involve conditional switching of memristors. Using the Cadence Virtuoso suite, we compare this logic scheme with MAGIC and CNIMP approaches, focusing on the universal NOR gate and more complex logic functions.
Description
© 2019 IEEE. Personal use of this material is permitted. Permission from IEEE must be obtained for all other uses, in any current or future media, including reprinting/republishing this material for advertising or promotional purposes,creating new collective works, for resale or redistribution to servers or lists, or reuse of any copyrighted component of this work in other works.
CitationEscudero, M. [et al.]. Memristive logic in crossbar memory arrays: Variability-aware design for higher reliability. "IEEE transactions on nanotechnology", 1 Gener 2019, vol. 18, p. 635-646.
URIhttp://hdl.handle.net/2117/168773
DOI10.1109/TNANO.2019.2923731
ISSN1536-125X
Publisher versionhttps://ieeexplore.ieee.org/document/8745694
Collections
Share: