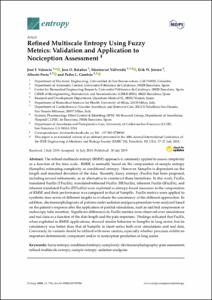 Jensen, Erik Weber
Porta, Alberto
Gambus, Pedro L.
Document typeArticle
Rights accessOpen Access
Abstract
The refined multiscale entropy (RMSE) approach is commonly applied to assess complexity as a function of the time scale. RMSE is normally based on the computation of sample entropy (SampEn) estimating complexity as conditional entropy. However, SampEn is dependent on the length and standard deviation of the data. Recently, fuzzy entropy (FuzEn) has been proposed, including several refinements, as an alternative to counteract these limitations. In this work, FuzEn, translated FuzEn (TFuzEn), translated-reflected FuzEn (TRFuzEn), inherent FuzEn (IFuzEn), and inherent translated FuzEn (ITFuzEn) were exploited as entropy-based measures in the computation of RMSE and their performance was compared to that of SampEn. FuzEn metrics were applied to synthetic time series of different lengths to evaluate the consistency of the different approaches. In addition, electroencephalograms of patients under sedation-analgesia procedure were analyzed based on the patient’s response after the application of painful stimulation, such as nail bed compression or endoscopy tube insertion. Significant differences in FuzEn metrics were observed over simulations and real data as a function of the data length and the pain responses. Findings indicated that FuzEn, when exploited in RMSE applications, showed similar behavior to SampEn in long series, but its consistency was better than that of SampEn in short series both over simulations and real data. Conversely, its variants should be utilized with more caution, especially whether processes exhibit an important deterministic component and/or in nociception prediction at long scales
CitationValencia, J. [et al.]. Refined multiscale entropy using fuzzy metrics: validation and application to nociception assessmentt. "Entropy: international and interdisciplinary journal of entropy and information studies", 18 Juliol 2019, vol. 21, núm. 7, p. 706-1-706-21.
URIhttp://hdl.handle.net/2117/168661
DOI10.3390/e21070706
ISSN1099-4300
Publisher versionhttps://www.mdpi.com/1099-4300/21/7/706
Collections
Share: