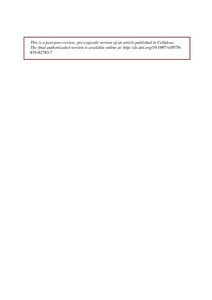 Savastano, Holmer
Document typeArticle
Rights accessOpen Access
Abstract
This study was performed to study the effects of the cement paste composition (calcium aluminate cement—CAC and a geopolymer in comparison to Portland cement—OPC) on bamboo pulp and nanofibrillated cellulose (NFC). The changes in the composition and chemical structure of the fibers were analyzed by X-ray photoelectron spectroscopy (XPS) and Fourier-transform infrared spectroscopy (FTIR). The changes in the mechanical strength were evaluated through tensile tests on the fibers after immersion on the cement pastes, in the form of sheets. The XPS results showed that the immersion of the pulp and NFC in the different pastes (CAC, geopolymer and OPC) modified the chemical surface of these fibers: it was found removal of lignin and extractives and some degradation of hemicellulose and cellulose. The FTIR analysis indicated modifications in the hydrogen bonds energy. The tensile strength of pulp sheets decreased in 70% and 34% after immersion in OPC and geopolymer, respectively. The tensile strength of the NFC sheets decreased 36%, 68% and 54% after immersion in OPC, CAC and geopolymer, respectively. Thus, the response of the bamboo pulp and NFC immersed in different cement pastes was different due the inherent characteristics of such fibers, and not only the Portland cement should be considered as harmful to lignocellulosic fibers. Although CAC and geopolymer are free of calcium hydroxide, the high alkalinity of these pastes also accelerated the degradation process of lignocellulosic fibers
Citationda Costa, V. [et al.]. Assessment of chemical and mechanical behavior of bamboo pulp and nanofibrillated cellulose exposed to alkaline environments. "Cellulose", 27 Agost 2019, vol. 26, núm. 17, p. 9269-9285
URIhttp://hdl.handle.net/2117/168612
DOI10.1007/s10570-019-02703-7
ISSN0969-0239
Publisher versionhttps://link.springer.com/article/10.1007/s10570-019-02703-7
Collections
Share: