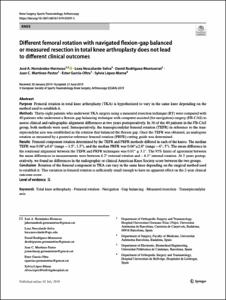 Rodríguez-Montserrat, David
Martínez Pastor, Juan C
García Oltra, Ester
López-Marne, Sylvia
Document typeArticle
Rights accessOpen Access
Abstract
PURPOSE: Femoral rotation in total knee arthroplasty (TKA) is hypothesized to vary in the same knee depending on the method used to establish it. METHODS: Thirty-eight patients who underwent TKA surgery using a measured resection technique (RT) were compared with 40 patients who underwent a flexion-gap balancing technique with computer-assisted (for navigation) surgery (FB-CAS) to assess clinical and radiographic alignment differences at two years postoperatively. In 36 of the 40 patients in the FB-CAS group, both methods were used. Intraoperatively, the transepicondylar femoral rotation (TEFR) in reference to the transepicondylar axis was established as the rotation that balanced the flexion gap. Once the TEFR was obtained, an analogous rotation as measured by a posterior reference femoral rotation (PRFR) cutting guide was determined. RESULTS: Femoral component rotation determined by the TEFR and PRFR methods differed in each of the knees. The median TEFR was 0.08°±0.6° (range -¿1.5°, 1.5°), and the median PRFR was 0.06°±2.8° (range -¿6°, 5°). The mean difference in the rotational alignment between the TEFR and PRFR techniques was 0.01° ± 3.1°. The 95% limits of agreement between the mean differences in measurements were between 6.2° external rotation and -¿6.1° internal rotation. At 2 years postoperatively, we found no differences in the radiographic or clinical American Knee Society score between the two groups. CONCLUSION: Rotation of the femoral component in TKA can vary in the same knee depending on the surgical method used to establish it. This variation in femoral rotation is sufficiently small enough to have no apparent effect on the 2-year clinical outcome score.
CitationHernández-Hermoso, J. [et al.]. Different femoral rotation with navigated flexion-gap balanced or measured resection in total knee arthroplasty does not lead to different clinical outcomes. "KNEE sugery sports traumatology arthroscopy", 3 Juliol 2019, p. 1-9.
URIhttp://hdl.handle.net/2117/168579
DOI10.1007/s00167-019-05591-3
ISSN0942-2056
Publisher versionhttps://link.springer.com/article/10.1007%2Fs00167-019-05591-3
Collections
Share: