Applications of machine learning to studies of quantum phase transitions 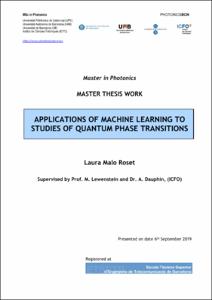 Show full item record
Malo Roset, Laura
Tutor / directorDauphin, Alexandre; Lewenstein, Maciej
Document typeMaster thesis
Rights accessOpen Access
Abstract
In the past years Machine Learning has shown to be a useful tool in quantum many-body physics to detect phase transitions. Being able to identify phases via machine learning introduces the question of how did the algorithm learn to classify them, and thus how to interpret the model?s prediction. In this thesis we present a study of the transition from a normal insulator to a topological insulator. We study this quantum phase transition in the framework of the Su-Schrie?er-Heeger model. In the area of Deep Learning, we introduce two models, a normal convolutional neural network and a model based on deep residual learning. In particular, we focus on the interpretability of the model and its prediction by generating class activation maps (CAM) using a global average pooling (GAP) layer. We show the application of this technique by applying it on the model without disorder and with disorder. Here we give further analysis of the detection of states using transfer learning from no disordered to disordered systems. We conclude that the neural network is able to detect edge states when there is no disorder but unable to distinguish between edge states and Anderson localized states when disorder is introduced.
SubjectsMachine learning, Neural networks (Computer science), Quantum theory, Aprenentatge automàtic, Xarxes neuronals (Informàtica), Quàntums, Teoria dels
URIhttp://hdl.handle.net/2117/168522
Collections
Share: