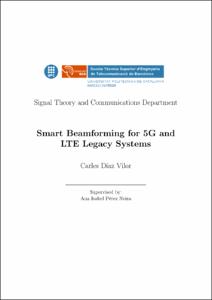 The new generation of wireless communication systems is expected to provide many features and advances for a variety of use cases. In addition, the basis of 5G, being the Long Term Evolution (LTE) will be developed in parallel, meaning that further improvements need to be done in both technologies. In this work we propose two novel schemes, one for each generation, that provide potential benefits for the scenarios in which we are focused, in terms of Bit Error Rate (BER), Probability of Collision and/or achievable Rate as we will see. Firstly, massive Machine Type Communications (mMTC) is a multi-user and multi-service air interface which will be key in the next generation of communications. In this work, we propose a frame structure and signal processing techniques at the receiver needed to create the beamformers whose final objective is reducing the probability of collision between devices trying to get the resources. In the end, this will imply that more users can access to the media, as the receiver would be able to manage the collisions that will occur in the frequency domain, being the case of a Non-Orthogonal-Multiple-Access. Second, as there is an increasing interest in rapidly varying channels, we focus on this aspect proposing a frame structure for LTE in which we are able to track better the channel in case it has a low coherence time, that in combination with beamforming techniques will help the system to null interferences from other users and to increase the Signal to Interference and Noise Ratio (SINR) yielding to a lower BER. In the same chapter, in addition, we try to figure out which is the best power allocation with respect to the SNR to mix both training and data to even increase more the rate with respect to LTE without degrading the BER so much. We expect this work will be useful for the development of the technologies which are said that will improve our lifestyles.
SubjectsWireless communication systems, Radio, Comunicació sense fil, Sistemes de, Ràdio
URIhttp://hdl.handle.net/2117/168519