Assessing beach and dune erosion and vulnerability under sea level rise: a case study in the Mediterranean Sea 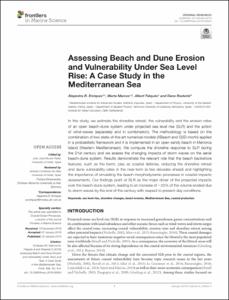 Roelvink, Dano
Document typeArticle
Rights accessOpen Access
Abstract
In this study, we estimate the shoreline retreat, the vulnerability and the erosion rates of an open beach-dune system under projected sea level rise (SLR) and the action of wind-waves (separately and in combination). The methodology is based on the combination of two state-of-the-art numerical models (XBeach and Q2D-morfo) applied in a probabilistic framework and it is implemented in an open sandy beach in Menorca Island (Western Mediterranean). We compute the shoreline response to SLR during the 21st century and we assess the changing impacts of storm waves on the aerial beach-dune system. Results demonstrate the relevant role that the beach backshore features, such as the berm, play as coastal defense, reducing the shoreline retreat and dune vulnerability rates in the near-term (a few decades ahead) and highlighting the importance of simulating the beach morphodynamic processes in coastal impacts assessments. Our findings point at SLR as the major driver of the projected impacts over the beach-dune system, leading to an increase of ~25% of the volume eroded due to storm waves by the end of the century with respect to present-day conditions.
CitationRodríguez Enríquez, A. [et al.]. Assessing beach and dune erosion and vulnerability under sea level rise: a case study in the Mediterranean Sea. "Frontiers in Marine Science", 25 Gener 2019, vol. 6, núm. 4, p. 1-12.
URIhttp://hdl.handle.net/2117/168478
DOI10.3389/fmars.2019.00004
ISSN2296-7745
Publisher versionhttps://www.frontiersin.org/articles/10.3389/fmars.2019.00004/full
Collections
Share: