A negative result for hearing the shape of a triangle 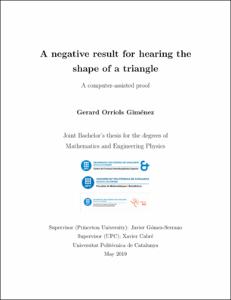 Except where otherwise noted, content on this work is licensed under a Creative Commons license : Attribution-NonCommercial-NoDerivs 3.0 Spain
Abstract
The project will consist of a mathematical research finding its place between the branches of Partial Differential Equations and Geometry, in particular dealing with inverse spectral problems of the Laplace operator. This class of problems tries to derive properties of a domain from the sequence of eigenvalues of the Laplace operator, which can be informally stated with the phrase “hearing the shape of a drum” coined by Mark Kac. These problems are easy to state but generally much harder to solve, and they constitute an area with many open problems and a lot of research efforts going on and advancing rapidly. Many of these problems are high-risk/high-profile: a success would be a groundbreaking achievement. The intent of the project is to solve one of these open problems, more precisely about the eigenvalues of the Laplacian with Dirichlet boundary conditions on polygons. A starting direction for the project could be to prove that the three smallest eigenvalues of the Laplacian on triangles determine them completely, whereas the first, second and fourth do not in general, as numerical evidence suggests. This is a conjecture of Antunes and Freitas (2011), which would give a quan
SubjectsFinite element method, Spectral geometry, Harmonic functions, Funcions harmòniques
DegreeGRAU EN ENGINYERIA FÍSICA/GRAU EN MATEMÀTIQUES
URIhttp://hdl.handle.net/2117/168422
Collections
Share: