Neural networks principal component analysis for estimating the generative multifactor model of returns under a statistical approach to the arbitrage pricing theory: Evidence from the mexican stock exchange 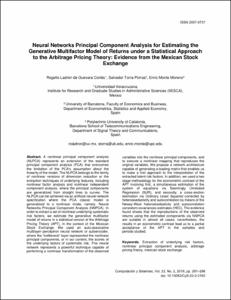 Document typeArticle
Rights accessOpen Access
Abstract
A nonlinear principal component analysis (NLPCA) represents an extension of the standard principal component analysis (PCA) that overcomes the limitation of the PCA’s assumption about the linearity of the model. The NLPCA belongs to the family of nonlinear versions of dimension reduction or the extraction techniques of underlying features, including nonlinear factor analysis and nonlinear independent component analysis, where the principal components are generalized from straight lines to curves. The NLPCA can be achieved via an artificial neural network specification where the PCA classic model is generalized to a nonlinear mode, namely, Neural Networks Principal Component Analysis (NNPCA). In order to extract a set of nonlinear underlying systematic risk factors, we estimate the generative multifactor model of returns in a statistical version of the Arbitrage Pricing Theory (APT), in the context of the Mexican Stock Exchange. We used an auto-associative multilayer perceptron neural network or autoencoder, where the ‘bottleneck’ layer represented the nonlinear principal components, or in our context, the scores of the underlying factors of systematic risk. This neural network represents a powerful technique capable of performing a nonlinear transformation of the observed variables into the nonlinear principal components, and to execute a nonlinear mapping that reproduces the original variables. We propose a network architecture capable of generating a loading matrix that enables us to make a first approach to the interpretation of the extracted latent risk factors. In addition, we used a two stage methodology for the econometric contrast of the APT involving first, a simultaneous estimation of the system of equations via Seemingly Unrelated Regression (SUR), and secondly, a cross-section estimation via Ordinary Least Squared corrected by heteroskedasticity and autocorrelation by means of the Newey-West heteroskedasticity and autocorrelation consistent covariances estimates (HEC). The evidence found shows that the reproductions of the observed returns using the estimated components via NNPCA are suitable in almost all cases; nevertheless, the results in an econometric contrast lead us to a partial acceptance of the APT in the samples and periods studied.
CitationLadrón de Guevara, R.; Torra Porras, S.; Monte, E. Neural networks principal component analysis for estimating the generative multifactor model of returns under a statistical approach to the arbitrage pricing theory: Evidence from the mexican stock exchange. "Computación y sistemas", 1 Gener 2019, vol. 23, núm. 2, p. 281-298.
URIhttp://hdl.handle.net/2117/168380
DOI10.13053/CyS-23-2-3193
ISSN2007-9737
Publisher versionhttp://www.cys.cic.ipn.mx/ojs/index.php/CyS/article/view/3193
Collections
Share: