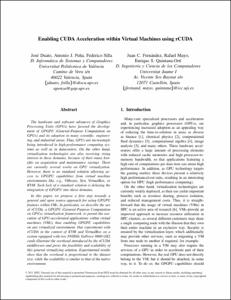 Show full item record
Duato, José
Peña, Antonio J.
Silla, Federico
Fernández, Juan C.
Mayo, Rafael
Quintana Ortí, Enrique Salvador
Document typeConference lecture
PublisherIEEE
Rights accessOpen Access
All rights reserved. This work is protected by the corresponding intellectual and industrial property rights. Without prejudice to any existing legal exemptions, reproduction, distribution, public communication or transformation of this work are prohibited without permission of the copyright holder
Abstract
The hardware and software advances of Graphics Processing Units (GPUs) have favored the development of GPGPU (General-Purpose Computation on GPUs) and its adoption in many scientific, engineering, and industrial areas. Thus, GPUs are increasingly being introduced in high-performance computing systems as well as in datacenters. On the other hand, virtualization technologies are also receiving rising interest in these domains, because of their many benefits on acquisition and maintenance savings. There are currently several works on GPU virtualization. However, there is no standard solution allowing access to GPGPU capabilities from virtual machine environments like, e.g., VMware, Xen, VirtualBox, or KVM. Such lack of a standard solution is delaying the integration of GPGPU into these domains. In this paper, we propose a first step towards a general and open source approach for using GPGPU features within VMs. In particular, we describe the use of rCUDA, a GPGPU (General-Purpose Computation on GPUs) virtualization framework, to permit the execution of GPU-accelerated applications within virtual machines (VMs), thus enabling GPGPU capabilities on any virtualized environment. Our experiments with rCUDA in the context of KVM and VirtualBox on a system equipped with two NVIDIA GeForce 9800 GX2 cards illustrate the overhead introduced by the rCUDA middleware and prove the feasibility and scalability of this general virtualizing solution. Experimental results show that the overhead is proportional to the dataset size, while the scalability is similar to that of the native environment.
CitationDuato, J. [et al.]. Enabling CUDA acceleration within virtual machines using rCUDA. A: "2011 18th International Conference on High Performance Computing". IEEE, 2012.
URIhttp://hdl.handle.net/2117/168226
DOI10.1109/HiPC.2011.6152718
ISSN1094-7256
Publisher versionhttps://ieeexplore.ieee.org/abstract/document/6152718
Collections
Share: