High temperature thermoplastic based on polybenzimidazole and silica nanocomposites 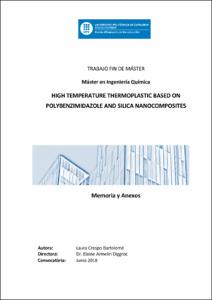 Document typeMaster thesis
Rights accessOpen Access
Abstract
Among thermoplastics polymers, polybenzimidazole (PBI), short for poly [2, 2’-(m-phenylene)-5,5’- bisbenzimidazole], is known for its exceptional thermal and chemical stability at elevated temperature. It is usually employed to fabricate high-performance protective tools such as synthetic fibers for firefighter’s gear, astronaut and welder’s suits, as well as in aircraft walls, as for examples. However, the most recent application of PBI polymer is as membrane in high-temperature polymer electrolyte membrane fuel cell (HT-PEMFC). PBI membranes must be doped with inorganic acids, like phosphoric acid (PA), to substantially improve their conductivity properties. Nevertheless, when doped, its mechanical integrity gets much worse, representing one of their major handicaps for the application of doped PBI in PEMFC devices. The addition of inorganic materials, such as titanium dioxide, silica or clay, into proton exchange membranes (PEM) is known to substantially improve their mechanical and thermal properties, as reported in previous studies; and, hence the capability of the membrane for high temperature fuel cell applications. In the present study, PBI membranes were prepared by solvent casting after the incorporation of chemically modified polyethyleneimine-silica nanoparticles (Si-PEI NPs). The use of PEI (Mw ≈ 800 g/mol) as silica coupling agent is intended to improve the interfacial interactions between the organic-inorganic surrounding in the polymer matrix. A detailed description of the synthesis and the methods used for the characterization of the new membranes is reported. Results demonstrated that chemically modified PBI-Si-PEI membranes have better properties than the pristine PBI films. Moreover, the conductive properties were also enhanced after the doping process with the PA molecules. Additionally, to the study above mentioned, another dopant molecule composed by dodecylbenzenesulfonic acid (DBSA) was investigated. It consisted in a brief study where the conductive properties were also approached. The DBSA molecules perform as dopant and plasticizer, due to the high number of methylene groups inside its chemical structure.
SubjectsPolymers, Polímers
DegreeMÀSTER UNIVERSITARI EN ENGINYERIA QUÍMICA (Pla 2012)
URIhttp://hdl.handle.net/2117/168218
Collections
Share: