Surface patterning of cemented carbides by means of nanosecond laser 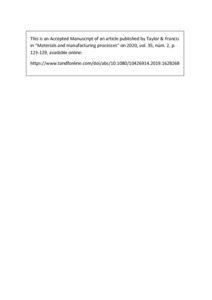 Document typeArticle
Rights accessOpen Access
Abstract
A nanosecond laser combined with a two-axis reflection control unit is used to shape polygonal pyramids with defined geometry on a specific cemented carbide grade. In total, 12 different surface patterns have been fabricated, including four pyramid shapes, i.e., triangle, square, hexagon and octagon, and three lateral side angles, i.e., 30°, 45° and 60°. Characterization of the geometrical features shows satisfactory agreement between produced patterns and aimed ones. The precision is improved when the number of polygon sides and/or both side and slope angles increase. Side effects, such as re-deposition, cracks and pores, were discerned through scanning electron microscopy inspection. They become less obvious when the polygon side length or side angle increases, as the material melting becomes less important. Based on the observations, a borderline curve can be plotted for describing the production capability of such surface patterns on cemented carbides using the laser technology
CitationFang, S. [et al.]. Surface patterning of cemented carbides by means of nanosecond laser. "Materials and manufacturing processes", 2020, vol. 35, núm. 2, p. 123-129
URIhttp://hdl.handle.net/2117/168206
DOI10.1080/10426914.2019.1628268
ISSN1042-6914
Publisher versionhttps://www.tandfonline.com/doi/full/10.1080/10426914.2019.1628268
Collections
Share: