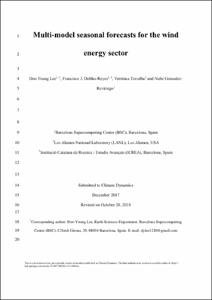 Gonzalez-Reviriego, Nube
Document typeArticle
PublisherSpringer
Rights accessOpen Access
All rights reserved. This work is protected by the corresponding intellectual and industrial property rights. Without prejudice to any existing legal exemptions, reproduction, distribution, public communication or transformation of this work are prohibited without permission of the copyright holder
ProjectREFUERZO DE LA RED ENERGETICA EUROPEA CON EL USO DE SERVICIOS CLIMATICOS (MINECO-CGL2013-41055-R)
Abstract
An assessment of the forecast quality of 10 m wind speed by deterministic and probabilistic verification measures has been carried out using the original raw and two statistical bias-adjusted forecasts in global coupled seasonal climate prediction systems (ECMWF-S4, METFR-S3, METFR-S4 and METFR-S5) for boreal winter (December–February) season over a 22-year period 1991–2012. We follow the standard leave-one-out cross-validation method throughout the work while evaluating the hindcast skills. To minimize the systematic error and obtain more reliable and accurate predictions, the simple bias correction (SBC) which adjusts the systematic errors of model and calibration (Cal), known as the variance inflation technique, methods as the statistical post-processing techniques have been applied. We have also built a multi-model ensemble (MME) forecast assigning equal weights to datasets of each prediction system to further enhance the predictability of the seasonal forecasts. Two MME have been created, the MME4 with all the four prediction systems and MME2 with two better performing systems. Generally, the ECMWF-S4 shows better performance than other individual prediction systems and the MME predictions indicate consistently higher temporal correlation coefficient (TCC) and fair ranked probability skill score (FRPSS) than the individual models. The spatial distribution of significant skill in MME2 prediction is almost similar to that in MME4 prediction. In the aspect of reliability, it is found that the Cal method has more effective improvement than the SBC method. The MME4_Cal predictions are placed in close proximity to the perfect reliability line for both above and below normal categorical events over globe, as compared to the MME2_Cal predictions, due to the increase in ensemble size. To further compare the forecast performance for seasonal variation of wind speed, we have evaluated the skill of the only raw MME2 predictions for all seasons. As a result, we also find that winter season shows better performance than other seasons.
CitationLee, D. Y. [et al.]. Multi-model seasonal forecasts for the wind energy sector. "Climate Dynamics", Setembre 2019, vol. 53, núm. 5-6, p. 2715-2729.
URIhttp://hdl.handle.net/2117/168196
ISSN0930-7575
Publisher versionhttps://link.springer.com/article/10.1007/s00382-019-04654-y
Collections
Share: